We’d always wanted to see the northern lights dancing over the ocean and when a North European cruise sailing above the Arctic Circle came up, we jumped at the chance. Cruising from England to Norway, the Shetland Islands, Iceland and Newfoundland then to New York, I’d envisioned Iceland as a frozen wasteland of glacial cold and ice. But just under the surface, it turns out, the entire island bubbles with hot lava. Perhaps that’s part of what gives its people such warmth and charm, and this itinerary such breathtaking scenery.

After flying to London and sailing from Southampton, our ship, the Ruby Princess, arrived in the port of Bergen, Norway. To my surprise, it was green and lush with trees! We rode the Funicular up to Mt. Flolen and gazed upon the entire city. We’d dressed for very cold weather, but at the top of Mt. Flolen, it was so warm no were jackets required. After a day at sea, we arrived at the famous Shetland Islands.

The Shetland Islands bring to mind the Shetland Ponies, and there they were, along the road and in so many places, amid a landscape of heather-covered moors and farms with grazing sheep. The road led to the Eshaness Lighthouse, built in 1929 by uncles of Robert Louis Stevenson and the last of the Stevenson lighthouses to be built in Shetland.

Sailing from the Shetland Islands to Iceland, we saw exactly what we were hoping to see. After crossing the Arctic Circle around 10:00 p.m., we gazed upon the Northern Lights from the port side of our ship. Pale green waves of light danced up and down in the night sky. No picture can adequately capture the feeling of witnessing this natural light show from the deck of a luxurious cruise ship floating in the cool, sea breeze.

Upon arrival at Akyreyri, Iceland, we prepared for any kind of weather from rain to sun as we set out to tour Godafoss Waterfall. We got rain but it only made the view of the rushing water that much more inspiring. Our next stop in Iceland was Namaskard, the site of boiling mud pools. One of the most active volcanic areas on Iceland, we saw weirdly shaped lava formations from the road that were left exposed as this former lava lake cooled and receded. So many panoramic views along the way, so much to photograph.

Finally, we arrived at Iceland’s capital city, Reykjavik. It is not a land of cold and ice. It is a lovely, bustling city with temperatures of approximately 50 degrees F. Its downtown looks similar to other city downtowns. We were looking forward to seeing Strokkur Geyser, an explosive geyser whose steamy spouts sometimes blast at least 60 feet skyward. The area is roped off because, unlike Yellowstone’s Old Faithful, it is difficult to predict when it might spout. Getting too close can result in injury. So many other marvelous sights in Reykjavik: the Geothermal Power Plant, Blue Lagoon where you can bathe in hot springs, Thingvellir National Park and the fishing village of Eyrarbakki. Tip: Wear comfortable and sturdy walking shoes, a waterproof jacket, and layers. 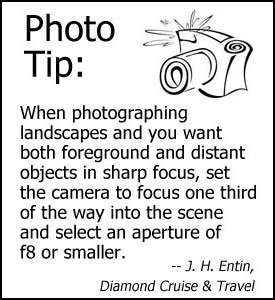 I’d thought sailing across the North Atlantic Ocean might be a little rough, but it was so smooth and calm and the weather became only more and more warm and pleasant as we arrived in St. Johns, Newfoundland. There in Canada, I found a wonderful, friendly city. This time, we signed up for a tour with a professional photographer, who brought us to the most scenic and colorful architecture, natural vistas and coastal landscapes. He also offered his guidance and experience in selecting camera settings to shoot like a pro.

We climbed up a hill to view the Cape Spear Lighthouse, Newfoundland’s oldest lighthouse, and then to Signal Hill, the sight of Cabot Tower, which was built to commemorate the 400th anniversary of John Cabot’s discovery. It is also the place where Marconi received the first transatlantic wireless signal. Of course, the true inventor of wireless radio was Nikola Tesla but Marconi secured the patent and the fame.

Sailing down the coast of the Canadian Maritime Provinces, we soon saw the New York City skyline and Port Liberty. After more than 150 cruises, I’d finally crossed the Atlantic. I solved the mystery. Iceland and its neighbors are not lands of cold and ice. They are wonderful, picturesque lands with friendly people and a comfortable warmth that’s worth discovering for yourself.